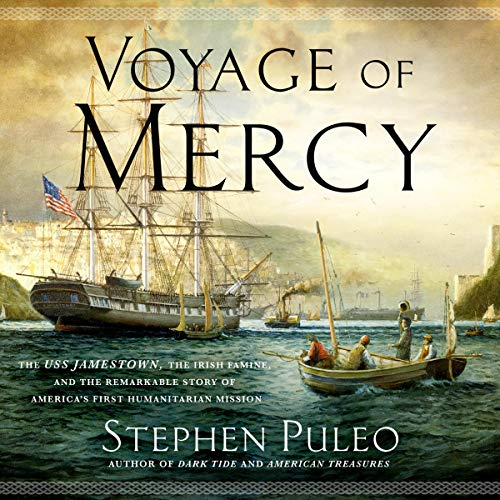 We were happy to hear that “Voyage of Mercy” written Stephen Puleo and narrated by Sean Patrick Hopkins was named an Earphone Award Winner by Audiofile Magazine. Post production for this title was done by Elephant Audiobooks for Macmillan Audio.

“Sean Patrick Hopkins offers exactly the kind of narration this audiobook deserves. He adjusts his tone to fit the material, which is studied in the biographical portions and borderline outraged in the discussion of England’s lack of response to the Irish famine. Because there are numerous quoted passages, Hopkins wisely resists giving even major figures unique voices. Instead, he pauses slightly before the quotes, providing aural quotation marks. He also pauses effectively in sentences, giving the listener time to catch up before moving to the next point. He makes this story of America’s first significant overseas aid effort and the two people most responsible–a sea captain and a Catholic priest–come alive. R.C.G. Winner of AudioFile Earphones Award © AudioFile 2020, Portland, Maine [Published: MARCH 2020]“